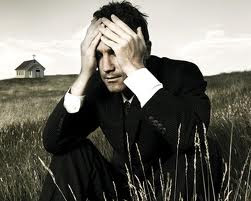 What do you say in response to the theist who simply chooses to believe in a God?  What response can you give when someone says that they feel the presence of God and have felt "watched over" and "guarded" their whole life?  This is not an intellectual position.  It is not a conclusion arrived at logically.  It is a choice after all to believe in the supernatural without evidence.  Faith claims, by necessity exist beyond reason but that is not the end of the story.  It becomes easy, when one adopts and atheist worldview (if such a thing exists) to reject claims based on the lack of empirical evidence.  This of course is the rejection of the thought; the cognitive conclusion.  It does not take into account the emotional conviction.
Now, I am fond of arguing the dualism of thoughts and feelings as a false dichotomy.  At the chemical level, emotions are really just thoughts of a different nature.  The metaphorical "heart" and "mind" are both products of the brain and represent converging brain states.  To say that emotions get in the way of thoughts is to misunderstand both.  A great many decisions and actions stem from emotions, or more specifically the interplay between reason and the internal shoves that we colloquially cram into boxes labeled fear, sadness or love.  These are brain states that should not be ignored in understanding the conscious or unconscious makeup of belief.
What am I getting at here?  Many believers claim to "know God" or claim to have felt his presence at specific moments in their life.  These statements should not be dismissed as unenlightened or worse delusional.  It is not a delusion to have a sensation of agency when unusual coincidences occur.  That sense of someone or something else plucks very primal  strings.  Those internal, animal instincts are the backbone of the cascade of emotional states that we are still beginning to understand at the neurological level.  Believing a claim that is harmonious with your emotional constitution is an ancient and evolutionally reliable way to understand the world.  It pains me to say this, but there is wisdom in the "Trust Your Gut" culture if only because your gut is your animal instinct.  The warning of danger, the drive to procreate, the HEY DON'T EAT THAT signal from somewhere inside your Limbic system.  Those instinctual needs are the ones that need to be met for most people to feel (and be) safe and healthy.  The intellectual pursuit; the quest for existential meaning, these are relatively new for our species.  In some ways they the luxuries of those without empty stomachs.
This is what those new age types call "emotional intelligence."  It has served mankind at least as much as it has held us back from cultural and societal progress.  Condescension is not the way to address this when talking to a believer.  We, as atheists often say that you can't reason someone out of a position they didn't reason themselves into.  It's about time we recognize that we probably didn't arrive at non-belief strictly by reason.  For almost all of us there was a time when the conclusion of a godless universe simply felt right.

Yeah, the wall between thinking and feeling is more like swiss cheese than anything else. What I will say is that if emotional/instinctual-cognition is trained properly, then you will people doing far less group think, logical fallacies, and watching FOX News.

A good article and I see the sense of it. I agree that condescension is a poor way to conduct a debate. The put down of believers on twitter is to me becoming a bit of an embarrassment. The emotional aspect of how we think is a valid part of any argument and that may be the key. The unbeliever (me) can clearly see the obvious lack of any God presence. The believer sees God in everything and unless there is a genuine engagement of the two viewpoints it’s a stand-off. God is so much in the make-up of our societies that the common person has to wait for opposing intellects in the media to engage. It is also noticeable how people of very high intellect seem to be smitten with the God emotion and where God is concerned they close their minds to debate.
Thanks for the article.

We need to be careful with this phrase. You might hold the following belief: that the pope can consciously choose what to believe. But did you pick that Pope-belief? Or just form/absorb it then tell us whether it felt like a choice.

Believers who say they choose to believe in x, are admitting they're consciously trying to internalise a belief. Intentionally making that thought part of their personal worldview.

If the pope said his religious beliefs were what he chooses to believe, he'd be laughed out of his papacy.

>>The intellectual pursuit...the luxuries of those without empty stomachs.

>>Believing a claim that is harmonious with your emotional constitution is an ancient and evolutionally reliable way to understand the world
>>...that need to be met for most people to feel (and be) safe and healthy.

Sort of. A primate brain is adapted to just barely clear the bar of natural selection. Reconciling the pope's fictional representation of his world to a factually correct "understanding of our shared world, human health, and feeling personally safe" requires the brain-power of countless expert thinkers organised systematically.

(originally the monastery, now the university)

>>Condescension is not the way to address this when talking to a believer.

Let's not speak of the 'ridicule strategy' as either "is working" or "is counter-productive".

There is much to learn about the psychology of myth busting (backfire effects etc), especially how to deconvert individuals from their specific politico-religious beliefs.

It might be a fact that many dig their heals in, potential allies get turned off and resist our cause, AND YET we see a reduction in societial stigma towards the nonreligious and the godless.

It depends entirely on the goals of the movement(s).

Patronizing those considered inferior, treating with an apparent kindness that betrays a feeling of superiority, that's exactly the behaviour we see demonstrated by our leaders with their ethical motive for winning the debate because the Ivy League Universities are in fact the most right.