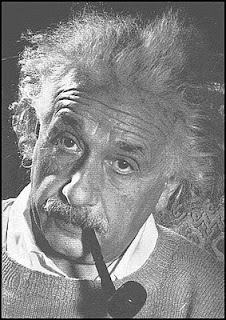 A somewhat nontraditional Monday Morning Quotes for us.  Today (3/14/11) is Albert Einstein’s birthday.   Many people on both sides of the religious vs. atheist debate quote Einstein and make attempts to claim him.  Hopefully here we can clear this up. He was neither. He was an agnostic and a Humanist.

"My position concerning God is that of an agnostic. I am convinced that a vivid consciousness of the primary importance of moral principles for the betterment and ennoblement of life does not need the idea of a law-giver, especially a law-giver who works on the basis of reward and punishment."
"I have repeatedly said that in my opinion the idea of a personal God is a childlike one. You may call me an agnostic, but I do not share the crusading spirit of the professional atheist whose fervor is mostly due to a painful act of liberation from the fetters of religious indoctrination received in youth. I prefer an attitude of humility corresponding to the weakness of our intellectual understanding of nature and of our own being."
"In view of such harmony in the cosmos which I, with my limited human mind, am able to recognize, there are yet people who say there is no God. But what really makes me angry is that they quote me for the support of such views."
“It was, of course, a lie what you read about my religious convictions, a lie which is being systematically repeated. I do not believe in a personal God and I have never denied this but have expressed it clearly. If something is in me which can be called religious then it is the unbounded admiration for the structure of the world so far as our science can reveal it.”
"A knowledge of the existence of something we cannot penetrate, of the manifestations of the profoundest reason and the most radiant beauty, which are only accessible to our reason in their most elementary forms—it is this knowledge and this emotion that constitute the truly religious attitude; in this sense, and in this alone, I am a deeply religious man."
"The individual feels [...] the sublimity and marvelous order which reveal themselves in nature [...] and he wants to experience the universe as a single significant whole."
"[E]ven though the realms of religion and science in themselves are clearly marked off from each other" there are "strong reciprocal relationships and dependencies [...] science without religion is lame, religion without science is blind [...] a legitimate conflict between science and religion cannot exist."
“I'm absolutely not an atheist. I don't think I can call myself a pantheist. The problem involved is too vast for our limited minds. We are in the position of a little child entering a huge library filled with books in many languages. The child knows someone must have written those books. It does not know how. It does not understand the languages in which they are written. The child dimly suspects a mysterious order in the arrangement of the books but doesn't know what it is. That, it seems to me, is the attitude of even the most intelligent human being toward God. We see the universe marvelously arranged and obeying certain laws but only dimly understand these laws. Our limited minds grasp the mysterious force that moves the constellations. I am fascinated by Spinoza’s pantheism, but admire even more his contribution to modern thought because he is the first philosopher to deal with the soul and body as one, and not two separate things.”
"I want to know God's thoughts; the rest are details." (this is not the monotheist’s God of Abraham).

“Two things are infinite: the universe and human stupidity; and I'm not sure about the the universe."

"My religion consists of a humble admiration of the illimitable superior spirit who reveals himself in the slight details we are able to perceive with our frail and feeble mind."

"The further the spiritual evolution of mankind advances, the more certain it seems to me that the path to genuine religiosity does not lie through the fear of life, and the fear of death, and blind faith, but through striving after rational knowledge."