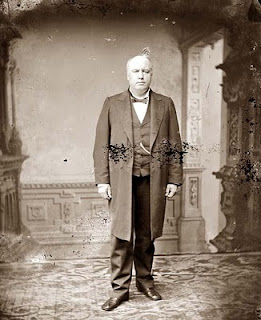 “We are satisfied that there can be but little liberty on earth while men worship a tyrant in heaven.”

“The notion that faith in Christ is to be rewarded by an eternity of bliss, while a dependence upon reason, observation and experience merits everlasting pain, is too absurd for refutation, and can be relieved only by that unhappy mixture of insanity and ignorance, called "faith."

“An infinite God ought to be able to protect himself, without going in partnership with State Legislatures. Certainly he ought not so to act that laws become necessary to keep him from being laughed at. No one thinks of protecting Shakespeare from ridicule, by the threat of fine and imprisonment.”

“Nothing is greater than to break the chains from the bodies of men -- nothing nobler than to destroy the phantom of the soul.”

“Is there an intelligent man or woman now in the world who believes in the Garden of Eden story? If you find any man who believes it, strike his forehead and you will hear an echo. Something is for rent.
If there be an infinite Being, he does not need our help -- we need not waste our energies in his defense.”

‘The man who does not do his own thinking is a slave, and is a traitor to himself and to his fellow-men.”

“The doctrine of eternal punishment is in perfect harmony with the savagery of the men who made the orthodox creeds. It is in harmony with torture, with flaying alive, and with burnings. The men who burned their fellow-men for a moment, believed that God would burn his enemies forever.”

“The Church demonstrated the falsity and folly of Darwin's theories by showing that they contradicted the Mosaic account of creation, and now that the theories of Darwin having been fairly established, the Church says that the Mosaic account is true because it is in harmony with Darwin. Now, if it should turn out that Darwin was mistaken, what then?”

“We have heard talk enough. We have listened to all the drowsy, idea-less, vapid sermons that we wish to hear. We have read your Bible and the works of your best minds. We have heard your prayers, your solemn groans and your reverential amens. All these amount to less than nothing. We want one fact. We beg at the doors of your churches for just one little fact. We pass our hats along your pews and under your pulpits and implore you for just one fact. We know all about your mouldy wonders and your stale miracles. We want a this year's fact. We ask only one. Give us one fact for charity. Your miracles are too ancient. The witnesses have been dead for nearly two thousand years.”

“Who can over estimate the progress of the world if all the money wasted in superstition could be used to enlighten, elevate and civilize mankind?”

“We have already compared the benefits of theology and science. When the theologian governed the world, it was covered with huts and hovels for the many, palaces and cathedrals for the few. To nearly all the children of men, reading and writing were unknown arts. The poor were clad in rags and skins -- they devoured crusts, and gnawed bones. The day of Science dawned, and the luxuries of a century ago are the necessities of to-day. Men in the middle ranks of life have more of the conveniences and elegancies than the princes and kings of the theological times. But above and over all this, is the development of mind. There is more of value in the brain of an average man of to-day -- of a master-mechanic, of a chemist, of a naturalist, of an inventor, than there was in the brain of the world four hundred years ago.
These blessings did not fall from the skies. These benefits did not drop from the outstretched hands of priests. They were not found in cathedrals or behind altars -- neither were they searched for with holy candles. They were not discovered by the closed eyes of prayer, nor did they come in answer to superstitious supplication. They are the children of freedom, the gifts of reason, observation and experience -- and for them all, man is indebted to man.”

“Orthodox Christians have the habit of claiming all great men, all men who have held important positions, men of reputation, men of wealth. As soon as the funeral is over clergymen begin to relate imaginary conversations with the deceased, and in a very little while the great man is changed to a Christian -- possibly to a saint.”

“The ministers, who preached at these revivals, were in earnest. They were zealous and sincere. They were not philosophers. To them science was the name of a vague dread -- a dangerous enemy. They did not know much, but they believed a great deal.”

“The old lady who said there must be a devil, else how could they make pictures that looked exactly like him, reasoned like a trained theologian -- like a doctor of divinity.”

“It is contended by many that ours is a Christian government, founded upon the Bible, and that all who look upon the book as false or foolish are destroying the foundation of our country. The truth is, our government is not founded upon the rights of gods, but upon the rights of men. Our Constitution was framed, not to declare and uphold the deity of Christ, but the sacredness of humanity. Ours is the first government made by the people and for the people. It is the only nation with which the gods have had nothing to do. And yet there are some judges dishonest and cowardly enough to solemnly decide that this is a Christian country, and that our free institutions are based upon the infamous laws of Jehovah.”
Check out Positive Atheism’s Big List of Robert Ingersoll Quotes. There are so many more. 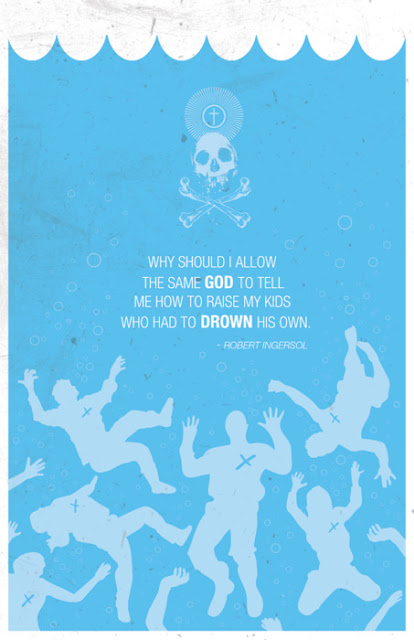