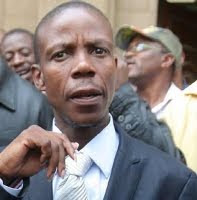 South African Pastor pastor Paseka "Mboro" Motsoeneng has been using his church's "Demon Banishing" services as a stage to publicly sexually abuse women in his congregation. Here is one of several examples of his abhorrent behavior at his Incredible Happenings Ministry.
Quoted text via The Friendly Atheist :
… Mboro called another young woman to the stage and made her lie down.
The young woman, who was not asked to identify herself, was told to tell the packed hall what her problem was.
“I haven’t slept with my husband for some time because it hurts when we make love.
“Every time he penetrates me, it feels like he is cutting me with a sharp knife,” she said.
Mboro took off his shoes and placed his foot on her vagina.
“There’s something breathing in her biscuit. It feels like a heartbeat,” he said.
He later ordered the woman to take off her undies. She complied. He said he wanted to “stitch it with his holy water”.
Motsoeneng sprinkled water on his right hand and rubbed the woman’s genitals.
He ordered her to call her husband “with all the nice words in the book of love and tell him she would discharge her conjugal rights”.
Enough attention has been brought to this monster's actions that he has been arrested. Although there is no guarantee that he will serve time.
Posted by Adam at 7:00 AM

i dont believe this.i think mbhoro is a great pastor although he did that to the woman but when i remember correctly the woman came back and said she now feels better and she enjoyed making love to her man

Hi Pastor,
You are a great Prophet no doubt about it. Your deeds,
wonderful miracles explain really, who you are. Yes
from the living GOD.
Could you please provide me with your contacts. I
want to make an appointment.

fake and Fraudster is what this man is.I'm just saying.

above all what they said ,he is a very good man who is doing gods work and giving back to the community .not evryone is like that .if you believe wrong of him keep that to your self.

I know nothing about the man, his works/deeds/ nor his beliefs and/or the truth of these claims.

However - if this is used to "demonize" Christianity the logic is flawed.

Unless a blanked judgement of all Atheist or Ant faithist(s)) could be lobbied by the actions of one or some affiliating the same.

So, if I pointed to Madalyn Mays, the founder of American Atheists and President from 1963 - 1986 who (along with her son President from 1986-1995)who were both murdered by the organizations office manager David Roland Waters. Can a claim be lobbied, fairly, against all Atheists now? Or is this a straw man argument?

I would say that a fallen (in sin) world will always have the scars of sin and fallenness as long as humanity is present.

This said, false prophets will be present. The Bible instructs the Church to look out for these: Acts 17:11, Matthew 7:15, Deuteronomy 18:20, 1 Thessalonians 5:21 and more. The presence of these people does not damage the truth of Christianity. Or was this (damaging Christianity) not the point of the article?

Thanks for commenting. No, we would not presume to use this to “demonize” Christianity any more than one would demonize any group via the actions of one or even many. That type of judgment would have to take into account an individual’s actions vs. the systematic actions of the larger group. For example, I have no problem with people that self-identify as Catholics (though I lament that they would willingly do so), but I have a very real problem with the Catholic Church as an organization due to its systematic actions. Judging Catholicism due to a man that identifies as Catholic committing murder would be stupid and dishonest. Judging Catholicism due to the actions of predatory priests is not. I think this illustrates that point well. I digress.

The point of the (now discontinued) Sunday Morning Hate posts, of which this was one, was to point out the prevalent hypocrisy by believers that one must have religion to be good and that religion is always good. I realize not everyone, believer or non-believer, subscribes to such faulty statements, but many do. Secondly, and more importantly, these types of posts bring to light some of the abusive actions of people that use their authority as religious figures to prey on others. These types of stories are buried in the media due to protectionism of religion in general. If an individual identifying as an atheist committed acts like this it would a) be all over the news and b) I would try and be at the forefront of spreading the word.

Finally, I do not accept the concept of sin and a fallen world. That sets up a worldview that is inherently negative. This post may shine a light on negative human behavior, but I do not think it is endemic to human actions, religious or irreligious. If it were, we would live in a dystopia. People generally want to do the right thing and not harm others. I detest the concept of sin and Original Sin as unnecessary stains and baggage on people that do not deserve to have such negative concepts foisted upon them. People like Paseka Motsoeneng are the outliers.

PS- I did not know that the founder of American Atheists was Madalyn Murray O-Hair nee Mays. I learned something new today. 

I personally used to hate mboro but becaue I am living in a haunted house, I tried everything in the world without success. Until one lady broughyt me mboro's salt. I use iit and everything is gone. I love mboro whole heartedly

Argh sies this is disgusting. To think it happens inside the Church with children watching. How can a woman take off her panties in front of people? With Mbhoro rubbing off her genitals with water before congregants is nothing short of Pornography. Shame on you Mbhoro for being a dirty 'man of God'.