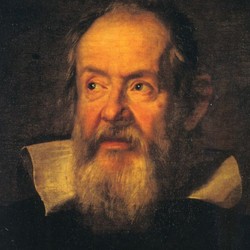 They know that it is human nature to take up causes whereby a man may oppress his neighbor, no matter how unjustly. ... Hence they have had no trouble in finding men who would preach the damnability and heresy of the new doctrine from the very pulpit... [Galileo Galilei, 1615]

I think that in the discussion of natural problems we ought to begin not with the Scriptures, but with experiments, and demonstrations. [Galileo Galilei, The Authority of Scripture in Philosophical Controversies]
To command the professors of astronomy to confute their own observations is to enjoin an impossibility, for it is to command them not to see what they do see, and not to understand what they do understand, and to find what they do not discover.[Galileo Galilei, The Authority of Scripture in Philosophical Controversies]

It vexes me when they would constrain science by the authority of the Scriptures, and yet do not consider themselves bound to answer reason and experiment. [Galileo Galilei, The Authority of Scripture in Philosophical Controversies]

It is surely harmful to souls to make it a heresy to believe what is proved. [Galileo Galilei, The Authority of Scripture in Philosophical Controversies]

Having been admonished by this Holy Office [the Inquisition] entirely to abandon the false opinion that the Sun was the center of the universe and immovable, and that the Earth was not the center of the same and that it moved... I abjure with a sincere heart and unfeigned faith, I curse and detest the said errors and heresies, and generally all and every error and sect contrary to the Holy Catholic Church. [Galileo Galilei, Recantation, 22 June 1633]

...nothing physical which sense-experience sets before our eyes, or which necessary demonstrations prove to us, ought to be called into question (much less condemned) upon the testimony of biblical passages. [Galileo Galilei, quoted in Blind Watchers of the Sky, p. 101]
I do not feel obliged to believe that same God who endowed us with sense, reason, and intellect had intended for us to forgo their use. [Galileo Galilei]

In questions of science, the authority of a thousand is not worth the humble reasoning of a single individual. [Galileo Galilei]

The doctrine that the earth is neither the center of the universe nor immovable, but moves even with a daily rotation, is absurd, and both philosophically and theologically false, and at the least an error of faith. [Catholic Church's decision against Galileo Galilei]

To assert that the earth revolves around the sun is as erroneous as to claim that Jesus was not born of a virgin. [Cardinal Bellarmino, 17th Century Church Master Collegio Romano, who imprisoned and tortured Galileo for his astronomical works, during the trial of Galileo]

To affirm that the Sun ... is at the centre of the universe and only rotates on its axis without going from east to west, is a very dangerous attitude and one calculated not only to arouse all Scholastic philosophers and theologians but also to injure our holy faith by contradicting the Scriptures [Cardinal Bellarmino, 17th Century Church Master Collegio Romano, who imprisoned and tortured Galileo for his astronomical works]

Thanks to About.com
Posted by Adam at 8:00 AM