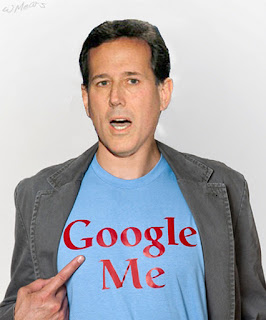 When I was told that Rick Santorum had rising poll numbers in Iowa, I did not pay any attention. As far as I was concerned, he wasn’t at the bottom of the barrel of Republican Candidates. Herman Cain was the bottom of that barrel. Santorum was, in my estimation, a fetid pile of shit unassociated with any barrel. He is little more than a political has-been who barely was.
Until recently, Santorum was sitting inertly at a paltry sub-percentage point support. He had no support and it accurately reflected his performance. Regardless of your opinion on the issues, Santorum was—politely—underwhelming. He provided a few laughs. I caught this clip and had a good laugh when he spazzed out and lost his cool on a few high school kids. And I was absolutely perplexed by his attempts at deep philosophical discussion of the philosophy of language:
I can say that marriage is — Marriage existed before governments existed. This is a napkin. I can call this napkin a "paper towel." But it is a napkin. Why? Because it is what it is. Right? You can call it whatever you want, but it doesn't change the character of what it is. Sort of the metaphysical. Right?
Marriage is what marriage is. Marriage existed before there was a government. It's like, you know, handing up this and saying this glass of water is a glass of beer. Well, you can call it a glass of beer, but it's not a glass of beer. It's a glass of water. And water is what water is. Marriage is what marriage is.
It's like going out and saying, "That tree is a car." Well, the tree's not a car. A tree's a tree. Marriage is marriage.
This is Santorum. By all accounts and in any light, Santorum is a joke. He is a shallow thinker, a poor debater, and someone who has spent his political life as a non-entity at best and an embarrassment at worst. No matter how short the increment, time has value and it should then not be wasted on anyone or anything that has no value. Ergo, until very recently, if time is going to be allotted to any real discussion or real analysis, Santorum should be excluded. But now Santorum appears to be, at least temporarily, a political entity.