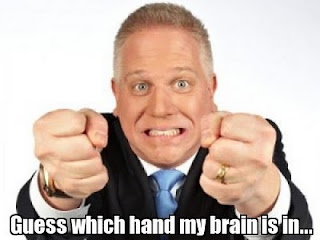 So here you have Barack Obama going in and spending the money on embryonic stem cell research. … Eugenics. In case you don’t know what Eugenics led us to: the Final Solution. A master race! A perfect person. … The stuff that we are facing is absolutely frightening. – radio show March 9, 2009
I have been nervous about this interview with you because what I feel like saying is, ‘Sir, prove to me that you are not working with our enemies. … And I know you’re not. I’m not accusing you of being an enemy, but that’s the way I feel, and I think a lot of Americans will feel that way.” –interviewing Rep. Keith Ellison (D-MN), the first Muslim U.S. congressman, Glen Beck’s show on CNN’s Headline News, Nov. 14, 2006
“I could give a flying crap about the political process.... We're an entertainment company.”  Forbes Magazine interview
Posted by Steve at 7:00 AM