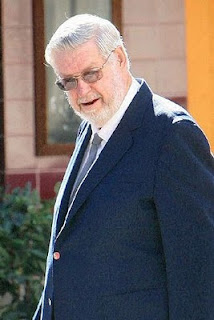 Father Murray Alexander Moffat was convicted of molesting a young girl between the ages 12 and 15.

“I should’ve said no but I didn’t. I thought you wanted me to do that.”
The Catholic Archdiocese did not act in the 1990's when the accusation was first made.  Fr. Moffat only received 3 months of jail time.
from the Queensland Times article: Priest blames girl for abuse
Posted by Steve at 7:00 AM