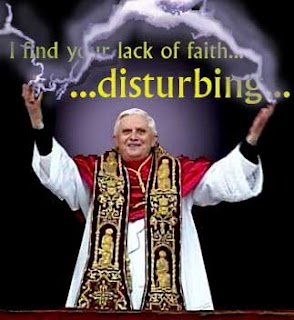 More than two-thirds – 67% – of the global total of 32.9 million people with HIV
live in sub-Saharan Africa. -The Guardian

March of 2009. On the flight to Yaounde, Cameroon. Discussing the AIDS epidemic.

NOTE: I have two different quotes here, due to seperate translations from his native language: Sith.
"You can't resolve it with the distribution of condoms. On the contrary, it increases the problem."

"[AIDS is] a tragedy that cannot be overcome by money alone, that cannot be overcome through the distribution of condoms, which even aggravates the problems."
He also said the "traditional teaching of the Church" on chastity outside marriage and fidelity within it had proved to be "the only sure way of preventing the spread of HIV and Aids".
Other Vatican officials have perpetuated lies about the effectiveness of condoms. It is doubtful that the pontiff actually believes that condoms cause AIDS. He does not seem to care if his followers believe it.
Posted by Adam at 7:00 AM