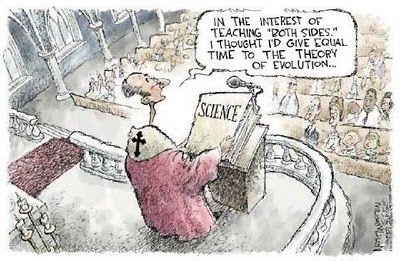 The Zombie Network: Beware 'Free Public WiFi' - A public service message from Left Hemispheres.  Also, I really should finish reading something before destroying my staircase.

What Columbus Already Knew - So the Catholic Church was even more willfully ignorant than previously thought.  Excellent.

Glenn Beck “Giving Legitimacy to the Violent Fringe” /gasps. No!

Animals can have spiritual experience just like humans - Yes, but the true test to see if they really are spiritual is to see if they discriminate, rape and murder due to their beliefs.  Only then are they as good and advanced as us humans.  Those damn dirty apes.

GOP’s Delaware Senate Nominee Christine O’Donnell Not a Big Fan of Evolution - Its just not even funny anymore.  How does a person like this get ONE vote for the nomination?

Hmmm...the Church wasn't all as bad as it is rumored to be, especially in regards to matters like heliocentricism, Galileo, and burning scientists at the stake. (SpiritRoaming does a pretty accurate yet brief summary of the Galileo situation here:
http://uk.answers.yahoo.com/question/index?qid=20081007064502AAOn3xc )

As far as the flat earth goes, Catholics held an Aristotelian view of celestial spheres for quite a long time, and even early scholars in the church (something like 500 AD?) were widely exposed works like that of the monk Bede who held the view of a spherical earth.

Was the Catholic Church an enemy to science? On rare occasions yes, but most of the time the Church was one of its biggest champions of education and science, as SpiritRoaming alludes to. (I am not aware of whether they developed the Scientific Method; I've not heard that one.)

The Catholic Church has been, and still is, consistently behind the 8-ball regarding science and modern morality. How can one justify the Church's current stance on condom use in Africa? Stem cell research?

Throughout history, the Church has reluctantly accepted scientific principles only after it has become widely accepted and painfully obvious.

As to the fact that the Catholics started the University system: yes they did. However, that is a non-sequitur. They wanted to educate people based on Doctrine and science that would justify their worldview. That has nothing to do with how the Church has been openly hostile to any scientific theory that conflicts with Holy Scripture which can be seen over and over again throughout history. It is not some secular revisionist conspiracy as "SpiritRoaming" seems to suggest.

As translated from the Latin:

"By the grace of God, Cardinals of the Holy Roman Church, and especially commissioned by the Holy Apostolic See as Inquisitors-General against heretical depravity in all of Christendom.

Whereas you, Galileo, son of the late Vincenzio Galilei, Florentine, aged seventy years, were denounced to this Holy Office in 1615 for holding as true the false doctrine taught by some that the sun is the center of the world and motionless and the earth moves even with diurnal motion;...And whereas this Holy Tribunal wanted remedy the disorder and the harm which derived from it and which was growing to the detriment of the Holy Faith, by order of His Holiness and the Most Eminent and Most Reverend Lord Cardinals of this Supreme and Univesal Inquisition, the Assessor Theologians assessed the two propositions of the sun's stability and the earth's motions as follows:

That the sun is the center of the world and motionless is a proposition which is philosophically absurd and false, and formally heretical, for being explicitly contrary to Holy Scripture;

That the earth is neither the center of the world nor motionless but moves even with diurnal motion is philosophically equally absurd and false, and theologically at least erroneous in the Faith."

But hey, thanks for reading!
Keep the faith, er...whatever.