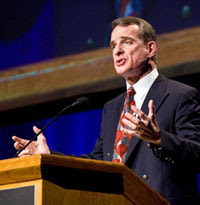 Hateful Rhetoric from Religious Leaders.
"God ensures that no one who would believe the gospel if he heard it remains ultimately unreached. Once the gospel reaches a people, God providentially places there persons who He knew would respond to it if they heard it. He ensures that those who never hear it are only those who would not accept it if they did hear it. Hence, no one is lost because of a lack of information or due to historical and geographical accident. Anyone who wants or even would want to be saved will be saved."
William Lane Craig justifying the position that every non-Christian will get what he deserves in the lake of fire. Even if their entire life is lived without exposure to Christianity.

Where do these guys come up with this garbage? They must lay awake thinking up this crap to pass on to their gullible congregations. When will we be rid of this backward medieval thinking?

This guy is hilarious. Probably never figured out the square peg/round hole thing as a child.