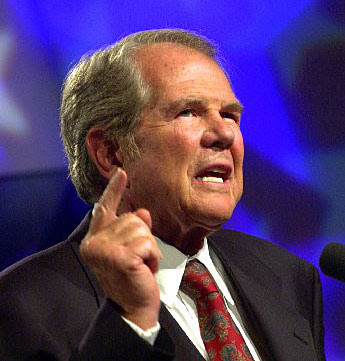 "Just like what Nazi Germany did to the Jews, so liberal America is now doing to the evangelical Christians. It's no different. It is the same thing. It is happening all over again. It is the Democratic Congress, the liberal-based media and the homosexuals who want to destroy the Christians. Wholesale abuse and discrimination and the worst bigotry directed toward any group in America today. More terrible than anything suffered by any minority in history." –Pat Robertson

"(T)he feminist agenda is not about equal rights for women. It is about a socialist, anti-family political movement that encourages women to leave their husbands, kill their children, practice witchcraft, destroy capitalism and become lesbians." –Pat Robertson

"I'd like to say to the good citizens of Dover: If there is a disaster in your area, don't turn to God, you just rejected him from your city. And don't wonder why he hasn't helped you when problems begin, if they begin. I'm not saying they will, but if they do, just remember, you just voted God out of your city. And if that's the case, don't ask for his help because he might not be there." -Pat Robertson, after a federal trial led to the removal of the members of the school board who instituted an Intelligent Design policy in Dover, PA.

"It may be a blessing in disguise. ... Something happened a long time ago in Haiti, and people might not want to talk about it. Haitians were originally under the heel of the French. You know, Napoleon the third, or whatever. And they got together and swore a pact to the devil. They said, we will serve you if you will get us free from the French. True story. And so, the devil said, okay it's a deal. Ever since they have been cursed by one thing after the other." –Pat Robertson, on the earthquake in Haiti - Jan. 13, 2010

“Many of those people involved in Adolf Hitler were Satanists, many were homosexuals - the two things seem to go together.''-Pat Robertson There is no such thing as separation of church and state in the Constitution. It is a lie of the Left and we are not going to take it anymore.-- Pat Robertson, address to his American Center for Law and Justice, November, 1993

"We have a court that has essentially stuck its finger in God's eye. We have insulted God at the highest levels of our government. Then, we say, 'Why does this happen?' It is happening because God Almighty is lifting His protection from us".-- Pat Robertson -Thursday, September 13, 2001
Posted by Adam at 7:00 AM