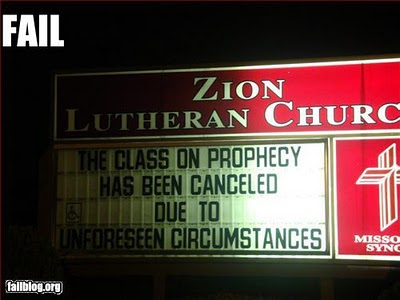 Welp, it’s the end of the year.  A time when lazy media outlets the world over compile “Top Ten” lists and “Best of” lists since they are simple, easy and people will read them since we are simple and lazy.  Considering we don’t do this for money...we will act no different!  Here is your ”Best of” Monday Morning Stupid Quotes.  Join us in rehashing things you have (hopefully) already read!

"I want to help clean up the state that is so sorry today of journalism. And I have a communications degree."

"Go back to what our founders and our founding documents meant -- they're quite clear -- that we would create law based on the God of the bible and the Ten Commandments."

"It may be a blessing in disguise. ... Something happened a long time ago in Haiti, and people might not want to talk about it. Haitians were originally under the heel of the French. You know, Napoleon the third, or whatever. And they got together and swore a pact to the devil. They said, we will serve you if you will get us free from the French. True story. And so, the devil said, okay it's a deal. Ever since they have been cursed by one thing after the other." –Pat Robertson, on the earthquake in Haiti

“I'll tell you what autism is. In 99 percent of the cases, it's a brat who hasn't been told to cut the act out. That's what autism is. What do you mean they scream and they're silent? They don't have a father around to tell them, 'Don't act like a moron. You'll get nowhere in life. Stop acting like a putz. Straighten up. Act like a man. Don't sit there crying and screaming, idiot.' "

"Macy's, have done away with the Christmas greeting, "Merry Christmas."Now, all of this anti-Christian stuff is absurd, and may even be a bias situation. But the real reason it's happening has little to do with Christmas and everything to do with organized religion. Secular progressives realize that America as it is now will never approve of gay marriage, partial birth abortion, euthanasia, legalized drugs, income redistribution through taxation, and many other progressive visions because of religious opposition". ~From Bill O'Reilly's Christmas Under Siege talking point page.

"The president has demonstrated that he has a default mechanism in him that breaks down the side of race - on the side that favors the black person."

"I think if you look at his quotes and how he has responded to questions about this, President Obama is at best very skeptical about the idea about American exceptionalism."

“Absolutely, but let me qualify that—I consider myself an authentic feminist. Not as defined by the modern movement. And, let me clarify that a little bit more. I was an English major, so break it down: -ist means one who celebrates. As a feminist, I celebrate my femininity.” - July 2010, Interview with Americans for Prosperity


“[The proposed burning is a] Zionist plot that is against the teachings of all divine prophets. Zionists and their supporters are on their way to collapse and dissolution and such last-ditch actions will not save them, but multiply the pace of their fall and annihilation.”
Posted by Steve at 8:00 AM