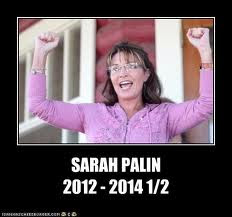 “I’m like, OK, God, if there is an open door for me somewhere, this is what I always pray, I’m like, don’t let me miss the open door. Show me where the open door is.”
"But obviously, we've got to stand with our North Korean allies." interview on Glenn Becks radio show, Nov. 24, 2010
"I want to help clean up the state that is so sorry today of journalism. And I have a communications degree. " Fox News interview with Sean Hannity, Nov. 22, 2010
"As we work and sightsee on s largest island, well get to view more majestic bears, so now is a good time to draw attention to the political equivalent of the species."  referring to Kodiak Island in , even though is s biggest island, July 19, 2010
Actually, Sarah, it is somewhat easy to explain.  The site is hosted in .  In case you are unaware, is not a part of the .  It is a sovereign nation.  The President of the and American law enforcement have no authority there.
Your book is copyrighted.  The cables are not.  Hence, the reason Gawker had to remove the excerpts from your book.
Additionally, Julian Assange is not a U.S. Citizen.  It is not treason if you are not a U.S. Citizen.
Posted by Steve at 8:00 AM