Hell No: A Tirade 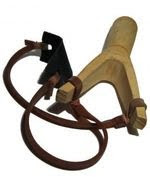 I once thought that the only thing that could possible make me into a believer was the birth of a child. Then he was born and 20 minutes later my wife almost died. We waited for a few hours before finding out that she was OK.
I didn’t pray. I. Could. Not.
She asked me to "start believing in god" before they wheeled her away.
I was an atheist in a foxhole.
What is most astounding to me is the shear number of people on this earth who still believe in a sky god.
It must be at least 85% of the population. One of the theist arguments is: how can that many people be wrong?
Exactly. I can hardly fathom that myself. Are we really the enlightened minority? I used to view religious people with such awe and respect. Their piety seemed so noble. Now when somebody says grace at a dinner, I get the urge to stab my hand with a fork under the table.
I want to argue with people about it. I want to shake people by the shoulders when they proudly exclaim that logic is not necessary. I want to shout, “Who made your Watchmaker?” But I don’t because it is impolite and I despise arrogance above all else. I was having a light conversation with a co-worker about faith a few months ago. She actually put her hands over her ears and hummed when I asked her a simple question that she needed logic (not faith) to answer.
She put her fucking hands over her ears. She has several degrees: And her brain shut down when I asked her about anthropomorphism:
"Does god have a face?"
"Yes"
"Does he need one?"
"La la la la"
I will not believe something because somebody told me so when I was a child. I am not a child. I will not believe something because I would like it to be true. Or because I'm afraid it might be. My own moral code works just fine without eternal damnation. I will not see my departed loved ones when I die, but they knew that I loved them when they were here. I do not stack regrets like newspapers in my basement. If I love you, you know it. Because this incredible life is the only one I can be certain of.
My mind is the best part of me. I refuse, I refuse, I refuse to turn it off.
Posted by Adam at 12:01 PM