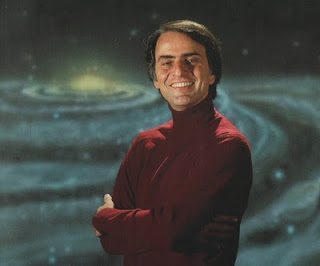 “Atheism is more than just the knowledge that gods do not exist, and that religion is either a mistake or a fraud. Atheism is an attitude, a frame of mind that looks at the world objectively, fearlessly, always trying to understand all things as a part of nature.”

“Science is a way of thinking much more than it is a body of knowledge.”

“We are like butterflies who flutter for a day and think it is forever.”
“Who is more humble? The scientist who looks at the universe with an open mind and accepts whatever the universe has to teach us, or somebody who says everything in this book must be considered the literal truth and never mind the fallibility of all the human beings involved?”

“Skeptical scrutiny is the means, in both science and religion, by which deep thoughts can be winnowed from deep nonsense.”

“Frederick Douglass taught that literacy is the path from slavery to freedom. There are many kinds of slavery and many kinds of freedom, but reading is still the path.”

“A celibate clergy is an especially good idea, because it tends to suppress any hereditary propensity toward fanaticism.”

“Somewhere, something incredible is waiting to be known.” 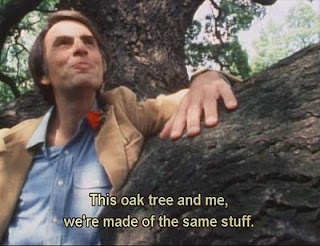 “The nitrogen in our DNA, the calcium in our teeth, the iron in our blood, the carbon in our apple pies were made in the interiors of collapsing stars. We are made of star stuff.”
“For me, it is far better to grasp the Universe as it really is than to persist in delusion, however satisfying and reassuring.”

“For small creatures such as we the vastness is bearable only through love.”

“I am often amazed at how much more capability and enthusiasm for science there is among elementary school youngsters than among college students.”

“In order to make an apple pie from scratch, you must first invent the universe.”

“Our species needs, and deserves, a citizenry with minds wide awake and a basic understanding of how the world works.”

“The brain is like a muscle. When it is in use we feel very good. Understanding is joyous.”

“The universe is not required to be in perfect harmony with human ambition.”

“The universe seems neither benign nor hostile, merely indifferent.”

“We have also arranged things so that almost no one understands science and technology. This is a prescription for disaster. We might get away with it for a while, but sooner or later this combustible mixture of ignorance and power is going to blow up in our faces.”

“Who are we? We find that we live on an insignificant planet of a humdrum star lost in a galaxy tucked away in some forgotten corner of a universe in which there are far more galaxies than people.”


Many of these quotes were compiled via BrainyQuotes and the Carl Sagan Quotes app for iOS.