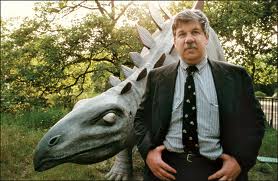 “Creation science has not entered the curriculum for a reason so simple and so basic that we often forget to mention it: because it is false, and because good teachers understand exactly why it is false. What could be more destructive of that most fragile yet most precious commodity in our entire intellectual heritage -- good teaching -- than a bill forcing honorable teachers to sully their sacred trust by granting equal treatment to a doctrine not only known to be false, but calculated to undermine any general understanding of science as an enterprise?”

“Well, evolution is a theory. It is also a fact. And facts and theories are different things, not rungs in a hierarchy of increasing certainty. Facts are the world's data. Theories are structures of ideas that explain and interpret facts. Facts don't go away when scientists debate rival theories to explain them. Einstein's theory of gravitation replaced Newton's in this century, but apples didn't suspend themselves in midair, pending the outcome. And humans evolved from ape-like ancestors whether they did so by Darwin's proposed mechanism or by some other yet to be discovered.”

“We are here because one odd group of fishes had a peculiar fin anatomy that could transform into legs for terrestrial creatures; because the Earth never froze entirely during an ice age; because a small and tenuous species, arising in Africa a quarter of a million years ago, has managed, so far, to survive by hook and by crook. We may yearn for a higher answer -- but none exists.”

“It seems the height of antiquated hubris to claim that the universe carried on as it did for billions of years in order to form a comfortable abode for us. Chance and historical contingency give the world of life most of its glory and fascination. I sit here happy to be alive and sure that some reason must exist for ‘why me?’ Or the earth might have been totally covered with water, and an octopus might now be telling its children why the eight-legged God of all things had made such a perfect world for cephalopods. Sure we fit. We wouldn't be here if we didn't. But the world wasn't made for us and it will endure without us.”

“The argument that the literal story of Genesis can qualify as science collapses on three major grounds: the creationists' need to invoke miracles in order to compress the events of the earth's history into the biblical span of a few thousand years; their unwillingness to abandon claims clearly disproved, including the assertion that all fossils are products of Noah's flood; and their reliance upon distortion, misquote, half-quote, and citation out of context to characterize the ideas of their opponents.”

“Debate is an art form. It is about the winning of arguments. It is not about the discovery of truth. There are certain rules and procedures to debate that really have nothing to do with establishing fact -- which they are very good at. Some of those rules are: never say anything positive about your own position because it can be attacked, but chip away at what appear to be the weaknesses in your opponent's position. They are good at that. I don't think I could beat the creationists at debate. I can tie them. But in courtrooms they are terrible, because in courtrooms you cannot give speeches. In a courtroom you have to answer direct questions about the positive status of your belief. We destroyed them in Arkansas. On the second day of the two-week trial we had our victory party!”

“Whenever you build a structure for adaptive reasons, the structure is going to exhibit properties that have nothing to do with adaptation. They're just side consequences. [...] Let's say the human brain gets big for natural selection reasons. Let's say it's an adaptation. There are some things we needed to do on the savannas of Africa for which a big brain was good. Now that doesn't imply that everything the big brain can do is therefore an adaptation. But that's the error that many so-called evolutionary psychologists make. Our brains didn't get big so that we could write, so that we could read, so that we could compose operas, so that we would know the facts of our personal mortality -- those arise as side consequences of building a big brain for other reasons.”

“History includes too much chaos, or extremely sensitive dependence on minute and unmeasurable differences in initial conditions, leading to massively divergent outcomes based on tiny and unknowable disparities in starting points. And history includes too much contingency, or shaping of present results by long chains of unpredictable antecedent states, rather than immediate determination by timeless laws of nature.”

“Homo Sapiens did not appear on the earth, just a geologic second ago, because evolutionary theory predicts such an outcome based on themes of progress and increasing neural complexity. Humans arose, rather, as a fortuitous and contingent outcome of thousands of linked events, any one of which could have occurred differently and sent history on an alternative pathway that would not have led to consciousness.”

“Objectivity cannot be equated with mental blankness; rather, objectivity resides in recognizing your preferences and then subjecting them to especially harsh scrutiny -- and also in a willingness to revise or abandon your theories when the tests fail (as they usually do).”

“Why get excited over this latest episode in the long, sad history of American anti-intellectualism? Let me suggest that, as patriotic Americans, we should cringe in embarrassment that, at the dawn of a new, technological millennium, a jurisdiction in our heartland has opted to suppress one of the greatest triumphs of human discovery.”

“The fundamentalists, by knowing the answers before they start and then forcing nature into the straitjacket of their discredited preconceptions, lie outside the domain of science -- or of any honest intellectual inquiry.”

Thanks to Positive Atheism for the list.
.
Posted by Adam at 7:00 AM