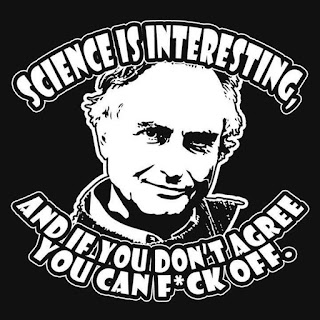 Archaeologists Protest 'Glamorization' of Looting on TV As an archaeologist, these shows really are a shitty thing to do. I’ve seen sites that are looted with holes randomly dug everywhere, artifacts that aren’t “sexy” enough are strewn about, they fuck up the stratigraphy, and I have even seen human remains cast aside by some asshole looking for pottery or something “valuable.” Glamorizing it is unethical, ESPECIALLY from National Geographic. I’m just going to put these petitions here. Sign them if you feel like it.

Stop Spike TV from looting our collective past!

Homophobes Have Nothing But Fallacies

Welcome to the American Secular Census Please consider signing up and taking the survey. You can do it anonymously if you desire. I want to see the results of this!

Only God Can Fire Pope Benedict After Scandals This article is two years old. Where’s your god now?

Carl Sagan: Be Grateful Everyday...  A friend posted this on Facebook and I thought it was amazing.

Frank Herbert: Litany against fear This is from the same artist that did the wonderful Sagan cartoon above. Actually I like this one better. It’s beautiful.

god is a monster... I had been sitting on this and just randomly posted it. It was shared far and wide!

Why the New Atheism is a boys' club  A good article makes you think. A great article pisses you off right before you realize they are right and makes you think harder.

The Truth About America's Religious Heritage “To acknowledge a heritage is fine, but it seems odd that we must do so by asserting religious truth claims (since the wording of both the Pledge and the motto assume that a God in fact exists). And isn't it puzzling that such efforts to "acknowledge heritage" are always led by religious organizations, not legitimate historical or educational societies?”

Misconceptions of the Pope “If God created us, and also has certain views on who with, how and when we have sex, then surely he has views on death too, since mortality is one of the payments for the sin of knowledge of life and death, as begun by Eve when she bit into the apple. That being the case, then surely any kinds of technologies that might protect us or prolong our lives are also against the rules. I’m sure that the Pope has never used heart medication, or had surgery of any kind, or had antibiotics to help him recover from a particularly nasty flu, has he?”

Guess how that story ends.


Atheist Billboard Goes Up in Harrisburg, Pennsylvania I’ll go take a picture of this on Saturday.

Do the KKK, or Muslims, Have Rights Atheists Don’t? which can be followed be up by Atheist Victim Threatened by Biased Judge for Publicizing Case Also in Pennsylvania. We really are the Alabama of the North. (I can legally say that as I lived in Alabama for three years while I went to grad school at the University of Alabama. ROLL TIDE!)

Why we need college degrees more than we need faith Well this article, of all the shit I post on various social media, created a debate between myself and my stepfather. He’s a Lutheran minister. Now in all fairness he is pretty far to the left (i.e. very much not in line with the GOP and fundies), but took issue with the idea that one can’t be educated and still have faith. If you read this here blog enough you may realize that one of my biggest gripes with Christianity is the entire concept of faith. Yeah...it went like that.

More Santorum memes than you know what to do with...

Jessica “Evil Little Thing” Ahlquist on CNN A little late to the party on this video. No matter, watch it again. I was such a moron at 15. She blows me away.

Maybe the Catholic Church Should Try This “A church in Florida has banned children from their services so their pastor, a convicted sex offender, can go on preaching without violating the law.”

No blood on the carpet. How disappointing. Dawkins’ response to the hack criticism he’s been receiving.


"It’s hard to resist a feeling of “You can’t win”. On the one hand we ‘horsemen’ and ‘new atheists’ are attacked, often aggressively and stridently, for being aggressive and strident. On the other hand, when journalists or religious apologists actually meet us and we turn out to be courteous and civilised, they accuse us of climbing down, “admitting” or “confessing” that we have changed, when actually we are behaving exactly as we always have. They seem to feel let down when they discover that the real people aren't anything like the way they so relentlessly portray us; as if, since they've gone to the trouble of inventing extravagant caricatures of us, we should at least have the decency to live up to them in real life."


Tribute to Richard Dawkins: "We are going to die."


If Mugging Were Treated The Same Way As Rape Word.

Fox Attacks On Obama Ignore Bush Apology For Quran Desecration Nothing regarding Fox surprises me anymore. At this point Fox News could spend 24 hours claiming Obama and the Left eat live babies and I wouldn't be shocked. At all.

Priest Walks Out Of Woman’s Funeral Because Of Her Gay Daughter What. An. Asshole.

Crazy Watering Can Yeah why not? It’s been making the rounds this week.

We've had enough from the right wing fundie nutcases the past 2 weeks.

I remember Maddie. My former law firm represented her until her demise.

She gave the wingnuts hell.

And what, exactly, would make you think that I am going "all repugnant party" on women secularists? Did you read the entire comment following the article? The implication was that I agreed with it.