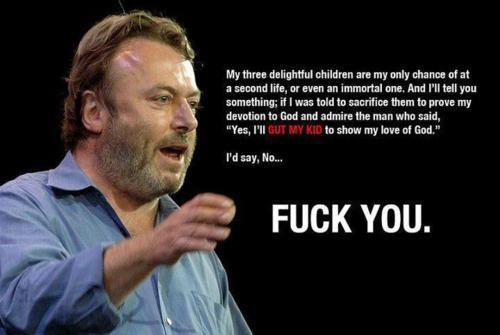 It is, of course, Christopher Hitchen’s birthday. The first since his passing. I’m drinking to him as I type my favorite quote:

Rock Beyond Belief Nick’s excellent summary of the atheist event on Fort Bragg. Even Justin Griffith thought so!

Discarding Relativism “...shedding this relativism is a greater moral stance since it doesn’t silence and impede my internal morality which is the only morality I can attempt.”

The Bible Challenge A friendly challenge to any Christian willing to read the Bible with some questions in mind and report back to us.

Are we Sheep? That damn sheep really is creepy.

Teen Pregnancies Highest In States With Abstinence-Only Policies Psst...also the most religious...

Of what use is philosophy?

Bruce Lee: “Be water, my friend.” I love Zen Pencils.

Would You Believe In God Because A Church Is Nice?

The Amazing Trajectories of Life-Bearing Meteorites from Earth

Sam Harris ~ The Illusion of Free Will

Locked Out: How the Church Responded to their Pastor’s Coming Out That famous Christian love again! My how the apostasy stings.

Peter Boghassian has made the rounds this week! I saw posts from Friendly Atheist, Atheist Revolution and friends sent me these two articles: Should We Challenge Student Beliefs? and Faith No More. The dude is pretty boss.

Scientists Closing in on Black Hole at Center of Our Galaxy


The Responsibility of Religious Moderates for Religious Extremism a great quote by Nate Phelps in this post. Also, Vjack inserts one of his old posts on the subject so I’ll do the same: Everything In Moderation? Maybe Not.

An awesome graphic of the deepest lakes and oceans from xkcd.

Cooperation Is a Key To Intelligence Mutualism FTW!

Will This Post Make Sam Harris Change His Mind About Free Will? A rebuttal to Sam Harris. Sam posted this article on Facebook with the following message: “John Horgan of Scientific American subscribes to my email list and complains that I ‘keep emailing’ him. The man's a genius.”

Free Will and “Free Will”: How my view differs from Daniel Dennett's and suddenly I realize how much Sam Harris is in this FLD. Oh well...

Fox’s misinformation effect Conservatism survives only via authoritarianism and lies.

My definition of a conservative.

Experts: Norway mass murder suspect sane and some wanted him to be declared insane so bad. Why?

Huh. No mention of organized, hierarchical religion as a result of agriculture? Pretty good video other than that. Oh and the snail thing...don’t know about that.

Was Jesus Happy? So one projects their personal and cultural beliefs onto their ideas of a higher being? Shocking!

Shaking Off the Cobwebs of the Crypt: The Evolution of the Zombie The author of this article has an awesome last name.


An old man walking along a beach at dawn noticed a young man ahead of him picking up starfish and flinging them into the sea. Catching up with the youth he asked what he was doing. "The starfish will die if they are still on the beach when the sun roasts them with its mid-morning heat," came the answer. "But the beach goes on for miles, and there are millions of starfish," countered the old man. "How can your effort make any difference?" The young man looked at the starfish in his hand and threw it safely in the waves. "It makes a difference to this one," he said.  --Unknown