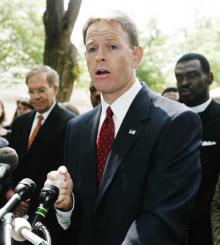 “…over the weekend we saw the news of the President’s Secret Service detail in Colombia and the issue of them hiring prostitutes and now the White House is outraged about that. Actually in a meeting this morning my staff asked, ‘why should the President be upset’? It was actually legal; it was legal there to do that, so why should we be upset? Well, the fact is we intuitively know it’s wrong, there’s a moral law against that.

The same is true for what the President has done to the military enforcing open homosexuality in our military. You can change the law but you can’t change the moral law that’s behind it. You can change the positive law, the law that is created by man, but you can’t change the moral law, it’s wrong. So what you have is you have a total breakdown and you can’t pick and choose. Morality is not a smorgasbord; you can’t pick what you want. I think you’re absolutely right, this is a fundamental issue going forward because if we say ‘let them do what we want,’ what’s next? You cannot maintain moral order if you are willing to allow a few things to slide.” (emphasis added)

--Tony Perkins the president of the Family Research Council, a known hate group.

Welp, they are lying again. Conservative Christians simply cannot base their agenda on truth, logic, or anything valid so they have to lie. It’s all they have. Aside from the absurd notion that the repeal of DADT led to the “moral” decay that allowed good, honest, presumably heterosexual males to screw (female) prostitutes in Columbia; we also get treated to the lie that President Obama is “enforcing open homosexuality” in the military. This is pure dipshittery. The real of DADT doesn’t mandate homosexual soldiers “out” themselves and sashay through the barracks. It allows them to serve without fear of being discharged simply for being gay. The truth is that gay servicemen and servicewomen have served with distinction, honor and valor throughout history; but previously would have been discharged for admitting they were gay or being “found out.” This is regardless of their professional and personal behavior, in and out of uniform. It is the very definition of discrimination; which is antithetical to any valid morality.

Speaking of morality; the hubris that is required for a human to instruct other humans on matters of morality while “speaking” for their supreme deity is immense. How bloated must one’s ego be? Perkins also states that one “can’t pick and choose” which morals to adhere to and that morality isn’t a smorgasbord. I don’t see Perkins or any of these Christians living their lives strictly by Biblically mandated “morals.” If they did they would be in jail—and rightfully so—but even if they ignored the more hateful, murderous and vile “morals” of the Bible to stay legal in our secular society, many would no more adhere to the rest of it. It would be terribly inconvenient for them.

Ah, how weak thou art, only seeing the whorizontal. God bless you.