Faith is a Locked Door 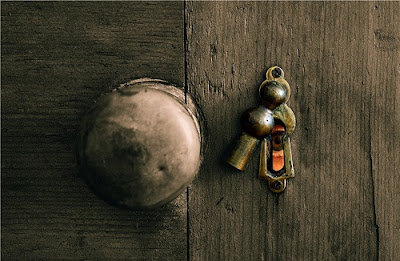 Let's all agree that no one knows with absolute certainty what happens when we die. Even the most dogmatic theist can acknowledge that according to their belief system, we cannot fathom the secrets of the universe with our limited human understanding. Using the individual and philosophical conclusions the following can be taken as the stances of each position. The agnostic atheist says that there is insufficient evidence to support a belief in gods. The pure agnostic (which Steve thinks doesn’t exist) usually rejects the theist claim, but maintains that the truth cannot be known. The theist chooses to believe in a god in spite of the lack of knowledge or evidence. Religious faith is the act of holding belief in a presupposed answer. This belief via faith is held without corroborating evidence regardless of the question. From each of these disparate perspectives this gap in understanding is a closed door. We have no way to perceive what is on the other side or even if there IS another side. Religious faith is unique in that it keeps that door locked. The attachment to the answer reduces the drive to ask questions. It constricts the ability to question at all. It demands that we concede and bow— literally—to a claim stated as a fact, without any of the rules we impose on facts.

There are multiple arguments made that there is empirical evidence for the existence of a god or gods. Obviously I don't agree, but I'm not going to argue that here. The existence of a creator does not lead inexorably to our knowledge of “him” after death. When it comes to the subject of the afterlife, we are all equally ignorant. The door to that information is essentially closed. Said another way: since we cannot communicate with the dead—if indeed there is anything to communicate with—there is no proof (in the way that we measure every other fact) that there is any part of us that continues beyond this existence.

This does not mean in any way that these claims are not worth exploring. I am so very tired of hearing about how "close minded" atheists/skeptics are. The approach is simple enough: we believe claims that have sufficient evidence and reject claims that do not. Rejecting a claim is not the end of the process. Because the process is not about finding or rejecting God, it's about finding truth. Why else would non-believers know so much about religion? Even after many of us have come to the conclusion that religious claims are false, we continue to study the material.  To examine the claims made by those who profess to know the answers to the important questions. We continue to search for the truth on the other side of the door. We want to open that door and will use whatever tools at our disposal to do so. Religious faith takes the opposite approach. It begins with a proclamation about the Universe. Distilled to its most basic form the claim states:

a)      That the Universe has a creator who rules over everything there is and is intricately interested in the inhabitants of one small rock that circles a burning ball of gas at the edge of galaxy amongst innumerable galaxies in an infinite universe which may or may not be one universe among many.
b)      The “Creator/Ruler” being will only make its presence known to very specific groups of people and individuals throughout history and will do so in vague and mysterious ways.
c)      Direct, unequivocal knowledge of this being’s existence is only available to the dead.
d)     The catch: you need to believe it before you die to reap the reward.

How on Earth was the majority of the planet convinced enough to buy this? Well, it used to be much easier, but the answer is to keep them from asking questions and stifle all objections to the claims and discourage scientific method or rational thought that does not lead to the pre-set conclusion. Faith is protected not by locking the door to the “other side” but by locking the door to reason and inquiry.
Posted by Adam at 9:49 PM

Faith isn't just locking the door, it's hiding it behind a bookshelf.