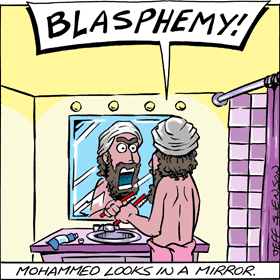 I don’t take any particular pride in offending people.  That may sound unusual on an atheist blog, but none of us here set out to be offensive.  As a matter of fact, we typically rail against anyone who is deliberately stoking the fires of religious fundamentalists if offense is their only goal.

We do support the freedom of expression of ideas; especially unpopular ideas.  Nothing is above reproach.  For the most part, we believe that mockery is a useful tool in pointing out the absurdity of religion.  The advent of Blasphemy laws serve only to silence dissent.  To remove the voice of the minority and to cut the communication of ideas to like-minded individuals as well as the larger public sphere.

Blasphemy is not about offending God.  It is about offending theists.  How arrogant must someone be to believe that the creator of the universe could be offended by the speech of an insignificant creature on a random rock hurling through the cosmos?

Of all the arguments against the existence of a Personal God the concept of blasphemy perfectly exposes the doublethink of theology.


1. You first must believe that the creator holds humanity in the highest regard.  I challenge you to find a blasphemy law supporter who does not think that the universe exists solely for humans.


2. You must believe that this perfect being can somehow be wounded emotionally by the thoughts, words and deeds of his creations.


3. You must believe in spite of premise 1 &2 that that this god is unwilling or unable to respond, dissuade or otherwise punish the blasphemer and must rely on the few faithful adherents to enforce this law.

To believe that God, along with his human prophets must be protected from criticism, mockery or satire by fallible humans is to worship an impotent deity.

A god that can be offended by speech or art is clearly one that has been made in man’s image, and possesses an ego that is just as fragile.  Blasphemy is daring to say that someone’s beliefs about the ultimate nature of reality are false.  This is the true thrust behind the anger and outrage of theists when their religion is insulted or even questioned.  If the people in power can have their beliefs questioned, then their power is also up for debate.

On this International Blasphemy Day I hope you all will go forth and rise above being offensive for no reason.  The goal is to reinforce the message that freedom of speech is a human right.  Call it an extension of “free will” (if there is such a thing).  We will not be bullied into silence. We cannot be subjugated with imaginary hell fire. Remember the difference between mocking the idea and mocking the person who holds the idea. And try to remind the believers that if their god were real he could probably take a fucking joke.
Posted by Adam at 12:30 AM