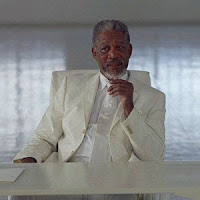 So the other day, I spoke to God. It was an accident. I swear. Here’s what happened:

I was driving to work. I was running a little late. Thinking to myself how the other drivers seem to slow down when I am in a hurry. Just then, the truck in front of me with the hazard lights made a quick turn as I came up behind him. The next few traffic lights turned green as I approached. It was as if reality was bending to my need to get to work on time. Looking at my dashboard clock and calculating that I just might make it on time, I tilted my head skyward and said, “thanks”. Then I remembered that I have been a non-believer for about 13 years. After having a good laugh at myself, I crafted something of a thought experiment.

I tried to remember the details of the drive. My frustration. My wish that people would just get out of my way. Then, the feeling that things were working out...just the way I wanted. Most importantly, there was a slight feeling that someone was looking out for me. Now, I know that if traffic had slowed even further, making me even more late, I would not have attributed it to a supernatural being. To be honest, if my car spontaneously started to levitate, I would jump to a scientific conclusion before thinking that a desert deity was the cause. But in that moment of a few probabilities tumbling in my favor, some hard-wired part of my consciousness still thought that I was special.

I believe that this is at the root of religion. At least the Abrahamic Religions. If you read this blog, you have seen more than a few scientists and intellectuals talking about the evolutionary benefit toassigning a causal agent to the domain of the unknown. Because that rustle in the leaves may be a predator, the individual who uses caution, lives to pro-create. The concept of that agent taking a special interest in my life is an especially attractive idea. Here’s where the hard wiring comes in. My early church education revolved around the concept of the universe being created as an act of love. When good things happened to you, you should be thankful for being a recipient of some of that love. My church rarely talked about Hell or the Devil. The message was more focused on being a good person. Love thy neighbor etc. Another primary message: the creator of the universe loves YOU. Now, these were not arrogant people, as far as I could tell. The overall goal seemed to be to love your neighbor as much as you were loved ~ even if neither of you really deserved it.

As an adult, and as a freethinker/skeptic, I understand the psychology and the philosophy behind these patterns of thought. There is confirmation bias at work: To give credit to the divine for the positive (or the unexplained). You see this with every touchdown genuflect. The reverse is also common, although not part of my original worldview. Many theists blame the dark forces in the mythology to explain misfortune. There are viable evolutionary and even developmental explanations for this Agent Assignment. An infant forming spatial awareness lacks Object Permanence. When mother leaves the room, the infant believes that they cease to exist. Later, they are able to understand that mother exists outside of their immediate perceptions and they begin to search the environment for clues of her presence: voice, scent etc. This eventually evolves into an intellectual understanding that the care-giver is somewhere nearby. If my 5-year-old calls for me and does not hear a response, he will begin a systematic search of the house based on the understanding that I would not leave him home alone.

The understanding of a divine presence operates on this premise. We cannot perceive a god with our senses, but we believe through a system of cognitive biases that He exists just outside of our field of perception. We can then assign causality to events we associate with divinity. We are taught from childhood an invisible force is watching us. We know that aspects of our existence are unexplained, and willfully (or unintentionally) insert God into those gaps. Religious experience, even if transcendant in nature is still an empirically electro-chemical process. The interpretation of sensory data is rooted in the brain. The specific interpretation is based on our individual concept of reality. The “what happens” and “why” of the space we inhabit. Childhood indoctrination and the bombardment of religious culture can create a powerful confirmation bias. Even if the confirmed beliefs are not actively held.
Posted by Adam at 12:00 PM