Not Praying for Japan 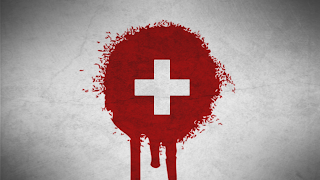 The March 11th earthquake in Japan is the most devastating natural disaster in the country's history. The death toll numbers are estimated to exceed ten thousand. The landscape has been decimated, and a nuclear fallout looms as damaged power plants threaten to leak radiation. The Internet abounds with calls to "Pray for Japan!"
This is an event that demands an explanation.

Natural disasters like this can be especially difficult for people of faith. In times of tragedy, anyone who believes that "things happen for a reason" must struggle with their inability to understand how such devastation fits in with a cosmic scheme or divine plan.
For many theists, the concept of human pain and suffering has been a source of dissonance. How does one reconcile an omnibenivolent and omnipotent deity who allows (or even commands) a tragedy like Japan's earthquake to occur? Statements such as "The Lord works in mysterious ways" offer little consolation in the wake of catastrophe. At times, these cliches are hurled with accusations of arrogance on the part of the curious. Who are we to judge the King of Kings? By saying that it is not our place to ask the creator to explain himself, we are asked to accept his will. This is the the ultimate Appeal to Authority. We are not meant to know.
The Christian answer to this question usually revolves around sin and evil. Matt Slick of Christian Apologetics & Research Ministry, writes:

First of all, it is possible that God has reasons for allowing evil to exist that we simply cannot understand. In this the Christian can have confidence in God knowing that His ways are above our ways (Isaiah 55:8-9). As the Bible says, the just shall live by faith (Hab. 2:4).

He goes on to say:

Suffering is the result of human sin. The world is not the way that God created it and because of that, all are vulnerable to the effects of sin in the world. Why does one person suffer and another does not? Why do catastrophes happen to some and not to others? It is because sin is in the world. But there will come a day when the Lord will return and cleanse this world of all sin and all suffering.

So we are to believe the the mere existence of sin in the world is the cause of suffering and it has no proximate relationship to the suffering individual. This is an ancient biblical concept. The modern individual bears the burden of the sins of the father. This is also the debt that was paid through blood sacrifice of Jesus. This of course only applies to those who accept him as their savior. The primary (interconnected) belief systems in Japan are Buddhism and Shintoism.

This article and others like it level the blame for natural catastrophe on the actions of mankind. Some of this sin is "original", some is accumulated by the collective turning away from God. There are some who blame the victims of these events, and others who point to the particular theology of the victims as some method of explanation. We are not to question the motives of God or subject his actions to moral scrutiny. He is moral because he is God. This is not an easy pill to swallow, even for the devout. Religious leaders urge their followers to rely on faith, when reason is suspended.

If we cannot know the will of God and cannot presume to make ethical judgements on his actions, then what is the purpose of prayer? Isn't prayer an act of asking God to change his mind? I don't mean to imply that all prayer is selfish. I know that most people pray for the well being of others. I know that the pious pray for guidance and understanding. Many pray for the ability to cope with their powerlessness, or to accept that they cannot know The Plan.

Prayer makes people feel better. It gives us the sense that we have some control over the random events of the cosmos. It is not an adequate substitute for action. It does not have an effect on actual events. It only changes the perceptions of the individual who is praying. Faith in a Plan allows the cognitive dissonance to believe that the suffering that afflicts others is somehow deserved. Or that good things can result from that suffering and somehow negate its impact. It allows us to sit on our couches while shaking our heads at the TV and say that God will provide help to the helpless. So we don't have to.

Suffering exists because it does. The universe is indifferent. An omnibenevolent deity that creates the circumstances for catastrophe (creating a planet with shifting tectonic plates, for example) then stands idle when disaster strikes is not, by definition: omnibenevolent. A god who behaves as if he does not exist is worthless. It is our responsibility as the stewards of this Earth to help one another to alleviate this suffering whenever and wherever we can. A belief in an afterlife with a cosmic reward system is not necessary. The evidence does not stack up. But in this case it does not matter. Testimony and conviction aside, one thing is certain. Japan needs aid. Not prayer

Well, even the mayor of Tokyo feels it is punishment from above. http://asiancorrespondent.com/50335/tokyo-mayor-tsunami-was-divine-punishment/

Kind of unrelated, but your post reminded me of something. The best theist argument as to why there is suffering in the world came from the pastor who married us (in those required pre-wedding meetings. Apparently, he was OK enough with me to allow me to marry in his church--but that's a topic for another day.)
Anyway, he explained that it exists because the people wanted to have free will and God granted that to humans. Which makes more sense than any other interpretation. Except that it doesn't. It simply makes "God's plan" meaningless and therefore nonexistent. Like you said, "A god who behaves as if he does not exist is worthless."

I posted a long and intelligent reply/comment on this post yesterday. It didn't save it, apparently. Damn.

Well done, anyway. I'm too tired to think about what I said yesterday.

Paul, I just found your original comment. For some reason Blogger thought it was spam. Maybe God put it there.