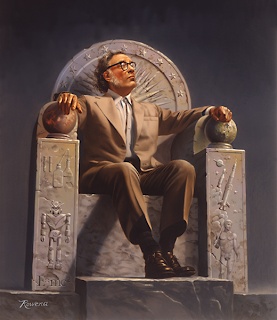 Those people who think they know everything are a great annoyance to those of us who do.

There are many aspects of the universe that still cannot be explained satisfactorily by science; but ignorance only implies ignorance that may someday be conquered. To surrender to ignorance and call it God has always been premature, and it remains premature today.

I am an atheist, out and out. It took me a long time to say it. I've been an atheist for years and years, but somehow I felt it was intellectually unrespectable to say one was an atheist, because it assumed knowledge that one didn't have. Somehow, it was better to say one was a humanist or an agnostic. I finally decided that I'm a creature of emotion as well as of reason. Emotionally, I am an atheist. I don't have the evidence to prove that God doesn't exist, but I so strongly suspect he doesn't that I don't want to waste my time.

I believe in evidence. I believe in observation, measurement, and reasoning, confirmed by independent observers. I'll believe anything, no matter how wild and ridiculous, if there is evidence for it. The wilder and more ridiculous something is, however, the firmer and more solid the evidence will have to be.

If I were not an atheist, I would believe in a God who would choose to save people on the basis of the totality of their lives and not the pattern of their words. I think he would prefer an honest and righteous atheist to a TV preacher whose every word is God, God, God, and whose every deed is foul, foul, foul.
I would also want a God who would not allow a Hell. Infinite torture can only be a punishment for infinite evil, and I don't believe that infinite evil can be said to exist even in the case of Hitler. Besides, if most human governments are civilized enough to try to eliminate torture and outlaw cruel and unusual punishments, can we expect anything less of an all-merciful God?

People are entirely too disbelieving of coincidence. They are far too ready to dismiss it and to build arcane structures of extremely rickety substance in order to avoid it. I, on the other hand, see coincidence everywhere as an inevitable consequence of the laws of probability, according to which having no unusual coincidence is far more unusual than any coincidence could possibly be.

[Creationists] make it sound as though a "theory" is something you dreamt up after being drunk all night.

But suppose we were to teach creationism. What would be the content of the teaching? Merely that a creator formed the universe and all species of life ready-made? Nothing more? No details?

How often people speak of art and science as though they were two entirely different things, with no interconnection. An artist is emotional, they think, and uses only his intuition; he sees all at once and has no need of reason. A scientist is cold, they think, and uses only his reason; he argues carefully step by step, and needs no imagination. That is all wrong. The true artist is quite rational as well as imaginative and knows what he is doing; if he does not, his art suffers. The true scientist is quite imaginative as well as rational, and sometimes leaps to solutions where reason can follow only slowly; if he does not, his science suffers.

I feel that if there were an afterlife, punishment for evil would be reasonable and of a fixed term. And I feel that the longest and worst punishment should be reserved for those who slandered God by inventing Hell.

There is no belief, however foolish, that will not gather its faithful adherents who will defend it to the death.

To be sure, the Bible contains the direct words of God. How do we know? The Moral Majority says so. How do they know? They say they know and to doubt it makes you an agent of the Devil or, worse, a Lbr-l Dm-cr-t. And what does the Bible textbook say? Well, among other things it says the earth was created in 4004 BC (Not actually, but a Moral Majority type figured that out three and a half centuries ago, and his word is also accepted as inspired.) The sun was created three days later. The first male was molded out of dirt, and the first female was molded, some time later, out of his rib. As far as the end of the universe is concerned, the Book of Revelation (6:13-14) says: "And the stars of heaven fell unto the earth, even as a fig tree casteth her untimely figs, when she is shaken of a mighty wind." … Imagine the people who believe such things and who are not ashamed to ignore, totally, all the patient findings of thinking minds through all the centuries since the Bible was written. And it is these ignorant people, the most uneducated, the most unimaginative, the most unthinking among us, who would make themselves the guides and leaders of us all; who would force their feeble and childish beliefs on us; who would invade our schools and libraries and homes. I personally resent it bitterly.

There's something about a pious man such as he. He will cheerfully cut your throat if it suits him, but he will hesitate to endanger the welfare of your immaterial and problematical soul.

I don't believe in an afterlife, so I don't have to spend my whole life fearing hell, or fearing heaven even more. For whatever the tortures of hell, I think the boredom of heaven would be even worse.
Posted by Adam at 8:00 AM