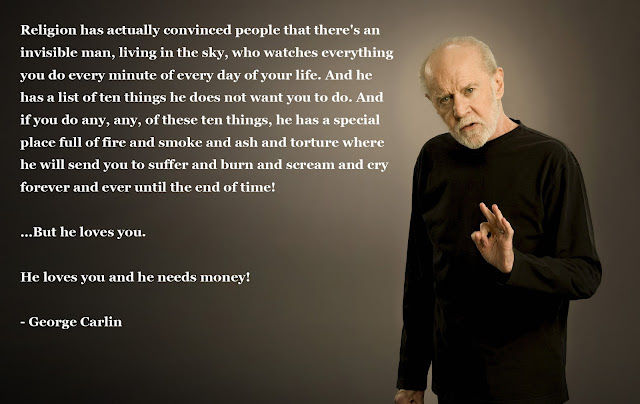 Atheism is a non-prophet organization.

If churches want to play the game of politics, let them pay admission like everyone else

I'm completely in favor of the separation of Church and State. My idea is that these two institutions screw us up enough on their own, so both of them together is certain death.

This is a lttle prayer dedicated to the separation of church and state. I guess if they are going to force those kids to pray in schools they might as well have a nice prayer like this: Our Father who art in heaven, and to the republic for which it stands, thy kingdom come, one nation indivisible as in heaven, give us this day as we forgive those who so proudly we hail. Crown thy good into temptation but deliver us from the twilight's last gleaming. Amen and Awomen.

Thou shalt keep thy religion to thyself.


I've begun worshipping the sun for a number of reasons. First of all, unlike some other gods I could mention, I can see the sun. It's there for me every day. And the things it brings me are quite apparent all the time: heat, light, food, a lovely day. There's no mystery, no one asks for money, I don't have to dress up, and there's no boring pageantry. And interestingly enough, I have found that the prayers I offer to the sun and the prayers I formerly offered to God are all answered at about the same 50-percent rate.

When it comes to bullshit...big-time, major league bullshit... you have to stand in awe, IN AWE of the all time champion of false promises and exaggerated claims: religion.

Trillions and trillions of prayers every day asking and begging and pleading for favors. 'Do this,' 'Gimme that,' 'I want a new car,' 'I want a better job,' and most of this praying takes place on Sunday. And I say fine, pray for anything you want. Pray for anything. But...what about the divine plan? Remember that? The divine plan. Long time ago god made a divine plan. Gave it a lot of thought. Decided it was a good plan. Put it into practice. And for billion and billions of years the divine plan has been doing just fine. Now you come along and pray for something. Well, suppose the thing you want isn't in god's divine plan. What do you want him to do? Change his plan? Just for you? Doesn't it seem a little arrogant? It's a divine plan. What's the use of being god if every run-down schmuck with a two dollar prayer book can come along and fuck up your plan? And here's something else, another problem you might have; suppose your prayers aren't answered. What do you say? 'Well it's god's will. God's will be done.' Fine, but if it gods will and he's going to do whatever he wants to anyway; why the fuck bother praying in the first place? Seems like a big waste of time to me. Couldn't you just skip the praying part and get right to his will?

Make sure to check out our George Carlin tag to see some of his stand up.

Ugh, I miss that guy. Truly special and on our team. I could be wrong on this, but as a 42 y/o it was probably him and Woddy Allen that I saw on TV in the 70's and heard the word atheist, and discovered that it was possible to not believe in God. I sort of remember asking my mom what an atheist was and she yelled at me, "You're not one." and that was that...except it wasn't. Awesome buddy,

Ya know what's funny? The more I hear about how other people grew up with religion the more I realize that my family was way cooler. And my step-father is a preacher! He loves Carlin as well.

I just never had the weird freak outs like that when honest questions were asked.