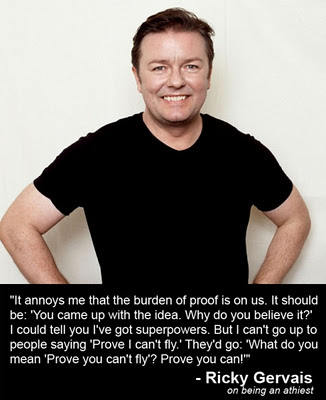 “I don't go after any particular religious group. I look at the absurdity of some beliefs. I don't think there's anything scary about this, these are facts to me. When a fundamentalist's belief is that the Earth is 5000 years old, that's ludicrous. It's 4.6 billion years. That should be taught as strict a truth as two and two are four. I don't want to offend anyone but sometimes I feel as if I'm talking to a 25-year-old child who believes in the tooth fairy. I've got to go: 'There's no such thing. Listen to yourself.’

The thing I do with my comedy is not preachy, militant or political. I'm not taking on how awful I think organised religion is. I'm taking on the pure epistemological point that of course it's not true. People say: What happened before the Big Bang? That to me isn't a closed avenue of scientific discovery. It's just that we don't know yet. God doesn't solve it because what happened before God? It's ludicrous that you can't explain matter and anti-matter in layman's terms without resorting to 'well a fairy did it then'. It's like medieval medicine. Why have we got doctrines that lay down politics and morality that were written thousands of years ago? It doesn't make any sense.”

“But living an honest life—for that you need the truth. That’s the other thing I learned that day, that the truth, however shocking or uncomfortable, in the end leads to liberation and dignity.”

“I’ve never tiptoed around the subject, not even in America,... I say it on TV in America; I say it on radio in America. I nail it to the mast. I did Inside The Actors Studio and the students were taken aback. They asked, ‘Don’t you think that coming out as an atheist will damage your career?’ And I went, ‘What am I meant to do? Lie?’ In the circles I move in, people haven’t got that prejudice.”

check out the Ricky Gervais tag.
Posted by Steve at 7:00 AM

I like the way Gervais addresses the issue and often feel the same way.