Answers In Genesis, That "Science' Quiz & Quotes Too Stupid Not To Share 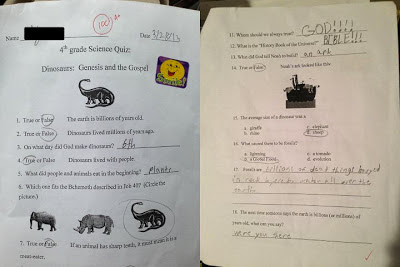 The following quotes can be found in an article entitled Intolerant Atheists Viciously Attack Christian School on Answers In Genesis (the creationist site run by Ken Hamm). This is their response to the widely circulated "science" quiz from a Christian school in North Carolina.

Due to the fact that I don't think I need to spend time pointing out the irony of the following statements (that and the fact it is really nice out and I have better things to do) I am simply going to post them and run away laughing. It really should be obvious anyway. If anyone is really confused as why these are ridiculous, please start the conversation in the comment section. If you play nice, so will we.

“They are attempting to impose their belief system (yes, their religion) on the culture.”

How Are Atheists Becoming More Aggressive in America?

“… government schools have increasingly become, in essence, churches of atheism.”

Not to let a good scare tactic go to waste, of course there is a plea for money. always asking for money:

“As an encouragement to this Christian school, which has been besieged lately, we ask you to contact the Academy through its website and offer your words of support—and also send it a donation as another means of encouragement. Blue Ridge Christian Academy www.brca.us is a non-profit 501(c)(3) organization; you can donate with a credit card or through PayPal at www.brca.us (see the right side of the homepage), or you can send a generous check in the mail to this address: Blue Ridge Christian Academy, 424 Hwy. 101, Landrum, SC 29356.”

Oh my god... that picture... I'm so glad Christian teachings are banned from school!