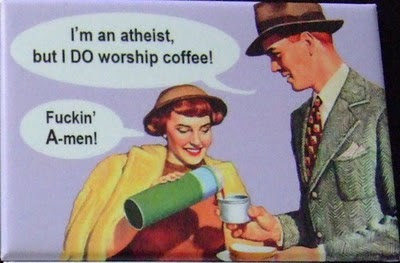 Support the Atheists of Florida

Autism Speaks is shining a light on autism by raising awareness in communities across North America. Please join us.

A New generation Expresses its Skepticism and Frustration with Christianity

Unreasonable Doubt & Illogical Apologetics - Funny story.  Somebody wasn’t paying attention and our anti-apologetics article here ended up in the The #Apologetics Daily on Twitter. Here was my reaction. So, from now on we should all flood the #apologetics hashtag, yeah?

Rabbi Adam Jacobs reasonable argument for God’s existence - It’s probably a good idea to poke around this website for awhile (once you have read the entirety our our site, of course). It has a lot of info in it.

Explore the 3-D depths of Mars

Watch: Sphincter-Obsessed Grandma Testifies at CO Civil Union Hearing - You'd think she would be cool with it due to the giant stick up her ass.

How did humans really evolve?


Top 20 Bible Passages to Use Against Fundamentalists - If you’re into that sort of thing.
Philadelphia Archdiocese places 21 priests on leave - I’m sure the Vatican sends them to Thailand for vacation “sensitivity” training.

Profile of the BBC's new face of religion - “Stay cool, Steve.” *fixes hair* “Why wouldn't she want to be friends with a blogger from the States?”

Seriously jaw-dropping picture of the Sun

Alabama GOP Official Explains Racial Disparities In Schools: ‘Blacks Misbehave’ - As someone who went to school in Bama (ROLL TIDE!) for a few years and still has friends from “down there;” I assure you not everyone in Alabama is a racist asshole. It’s just that...there are...a lot of racist assholes.

The Professor Brothers: Sodom & Gomorrah - I laugh every time.

REPORT: Ending Tax Dodging By The Rich Would Save More Money Than Gutting Ohio’s Unions


Anti-Muslim Protestor Throws Crosses At Feet Of Man Praying By White House - Who is more dangerous to America? Who?
Hagfish Just Got More Disgusting

Are We in the Middle of a Sixth Mass Extinction?

There's one person playing race cards and it's Maggie Gallagher - More NOM hate. We at LH are in the process of collecting more NOM talking points and press releases for a future takedown, but let me tell you: it is hard to keep up! They produce large quantities of hateful rhetoric. None of which is logical.

Bishops boot 'booty' from revised Bible - Jack pointed out that the larger issues is this:

“The 1970 version of Isaiah 7:14 says ‘the virgin shall be with child, and bear a son, and shall name him Immanuel.’
The 2011 text refers to ‘the young woman’ instead. It elaborates that the original Hebrew word, almah, may, or may not, signify a virgin.”
... seems like kind of a big deal to try and sneak past everybody.

Welcome to Rapture in the Air  - Check this out.  RELEASE TEH TROLLS!

Religious Right Group Says Anti-Bullying Programs Will "Homosexualize" Children - Jack  thinks that sometimes “it's their strategy is to say stuff so mindbogglingly stupid that all our heads just explode at once.” Possibly.

Fail Beyond Belief - Once the again the U.S. Military shows its true colors as an Christian evangelizing wing of the U.S. government.

Don’t hate the children. It’s not their fault.

Vatican confirms report of sexual abuse and rape of nuns by priests in 23 countries - The depravity...it knows no limits.

Drunk Priest Offers Oral Sex to Cops - I made the following joke on Twitter. I was quite proud of myself: “Way to tell straight vs. gay priests: gay priest offers bjs to adults. Straight priest insists children blow him.”

Image of the Day: 2 Billion-Year-Old Nuclear Reactor Fossil! - Do what now? It never occurred to me that this was possible. It is one of those things where if you think about it it makes perfect sense.

Sunday Morning Crazy ~ Kirk Cameron  - We re-tooled the Sunday Morning Feature a bit for reasons described in the link.  Not that the “Hate” will never return, but is was getting redundant.

Monday Morning Quotes: Carl Sagan - Everyone should watch, listen and read more Carl Sagan. He is soothing. Whenever some smug, ignorant theist says atheism or naturalism is depressing because it has no point; please refrain from smacking them across the face and instead point them to Carl Sagan.

South Dakota Bill Would Mandate Religious Counseling Prior To Abortion - Do you ever get tired of repeating the same logical argument over and over again. I do.

What is creating all that energy beneath the ice on Saturn’s moon Enceladus?


Five Things Unions Have Done For All Americans - This doesn’t have much to do with the link but I started to rant and couldn't stop. Here goes: I am completely re-evaluating my political viewpoints. I never liked the Democrats, but I had always perceived them as the dam against the tide of hawks, conservatives, theocrats and hyper-capitalists. Not anymore. They are either all the same party and the Dems are just meant to shake shiny objects at left-leaning people so they don’t realize they are being really fucked (as the GOP does with shiny crosses to the right leaners), or they are impotent. We are being choked by corporations and their cronies and the Christian Nationalists/Tea Party are at the door. Also, WHAT THE FUCK ARE WE STILL DOING IN AFGHANISTAN?
- exhales -
Ancient human sacrifice temple found in Peru - oooo neat...


TED: Deb Roy & The Birth of a Word - A really amazing study after the jump.

man i hate these people

Are you fucking kidding me? I'll go and stand in front of them. That's not far from my area.