Every Monday morning we'll post quotes from American politicians and pundits that show their ignorance of science, the constitution and reality. Go ahead and laugh.  Then cry. 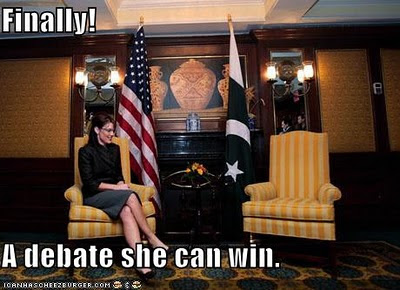 "Go back to what our founders and our founding documents meant -- they're quite clear -- that we would create law based on the God of the bible and the Ten Commandments." –Sarah Palin, interview with Bill O'Reilly, May 6, 2010
"The America I know and love is not one in which my parents or my baby with Down Syndrome will have to stand in front of Obama's 'death panel' so his bureaucrats can decide, based on a subjective judgment of their 'level of productivity in society,' whether they are worthy of health care. Such a system is downright evil." – Sarah Palin, message Facebook post, Aug. 7, 2009
"I think on a national level your Department of Law there in the White House would look at some of the things that we've been charged with and automatically throw them out." - Sarah Palin, ABC News interview, July 7, 2009
*ed. Note: The Department of Law does not exist.  Never has.
"We believe that the best of is not all in ... We believe that the best of is in these small towns that we get to visit, and in these wonderful little pockets of what I call the real , being here with all of you hard working very patriotic, um, very, um, pro-America areas of this great nation." - Sarah Palin,  N.C., Oct. 16, 2008
"I beg you, Women of Joy, to bring light and be involved, loving America and praying for her. Really, it is our solemn duty. Praying for true spiritual awakening to overcome deterioration. That is where God wants us to be. Lest anyone try to convince you that God should be separated from the state, our Founding Fathers, they were believers. And George Washington, he saw faith in God as basic to life." -Sarah Palin (cannot find the exact date, but I am sure she wouldn't deny saying it)


Referring to teaching Creationism in public schools:  “Teach both. You know, don’t be afraid of information.... Healthy debate is so important and it’s so valuable in our schools. I am a proponent of teaching both. And you know, I say this too as a daughter of a science teacher.” _Sarah Palin, Boston Globe, “A valentine to evangelical base”, Aug 30, 2008
Questioner: Are you offended by the phrase “Under God” in the Pledge of Allegiance?
Sara Palin: Not on your life. If it was good enough for the founding fathers, its good enough for me and I’ll fight in defense of our Pledge of Allegiance.
Source: Eagle Forum 2006 Gubernatorial Candidate Questionnaire Jul 31, 2006
Questioner: We talk on the anniversary of 9/11. Why do you think those hijackers attacked? Why did they want to hurt us?
Sarah Palin: You know, there is (sic) a very small percentage of Islamic believers who are extreme and they are violent and they do not believe in American ideals, and they attacked us and now we are at a point here seven years later, on the anniversary, in this post-9/11 world, where we’re able to commit to never again. They see that the only option for them is to become a suicide bomber, to get caught up in this evil, in this terror. They need to be provided the hope that all Americans have instilled in us, because we’re a democratic, we are a free, and we are a free-thinking society.
Source: ABC News: 2008 election interview with Charlie Gibson Sep 11, 2008
AND THEN....
"Ground Zero Mosque supporters: doesn't it stab you in the heart, as it does ours throughout the heartland? Peaceful Muslims, pls refudiate." - a Tweet by Sarah Palin, which she quickly removed after being ridiculed for inventing the word "refudiate," July 18, 2010

"Peaceful New Yorkers, pls refute the Ground Zero mosque plan if you believe catastrophic pain caused @ Twin Towers site is too raw, too real." - a second Tweet by Sarah Palin, which she also removed after misusing the word "refute," July 18, 2010

"'Refudiate,' 'misunderestimate,' 'wee-wee'd up.' English is a living language. Shakespeare liked to coin new words too. Got to celebrate it!'" - a follow-up Tweet by Sarah Palin, proudly mistaking her illiteracy for literary genius, July 18, 2010 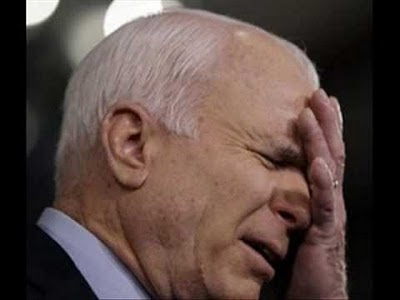