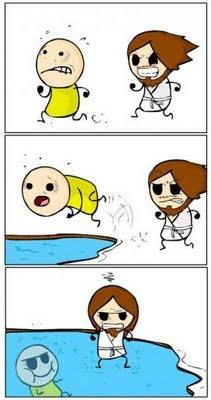 One Year of Left Hemispheres Our “Best of” compilation celebrating one year of existence.

Probability and Evolution "They typically toss off combinatorial arguments in which the probability of evolving some complex molecule, like hemoglobin, is taken to be one over the number of ways of arranging the amino acids in that molecule. Sadly, that only works if all of those arrangements are equiprobable, but the continuing action of natural selection ensures that they are not."

Cops: Student plotted gas attack on anti-pope crowd in Spain Also not a "real" Christian, I would assume.

A Natural Agent “Imagine a delicate ecosystem of fragile bacteria that is dependent on the pH of the water it lives in. Now imagine that you poke your dirty human finger into that ecosystem. The moment you interact with a system that you exist outside of, you become part of that system.”

No, *This* Is How We Get More Black People Involved in the Atheist Movement

Why Do Atheists Care? “The reason I talk about it so much is because I care what is going on in the world around me. The religious, in case you haven't noticed, are everywhere.”

Spare the rod, spoil the child not “real” Christians?

What I Learned in Two Years at the Tea Party The Tea Party is “grassroots anti-abortion, pro-Christian activism” with an only recent and fleeting interest in economics.

Monday Morning Quotes: Richard Feynman “What I cannot create, I do not understand.”

The Religious Right's Spin On Science

Letter: Silly to blame Christianity, or Islam, for acts that dishonor either

Jack: "No religion should be blamed for the acts of its people" ... I think
that statement achieves some kind of critical mass of bullshit.

Steve: A gravitational singularity of bullshit, if you will. Infinite
density and zero volume.

Penn Jillette vs. Piers Morgan on Atheism and Religion I already can’t stand Piers Morgan. This did nothing to contradict that.

Mid-Week Rant: Hitchens roasts Falwell You could watch the whole thing and if you weren’t paying attention at the end you would miss Hitch say "If you gave Falwell an enema, he could be buried in a matchbox" Pure gold!